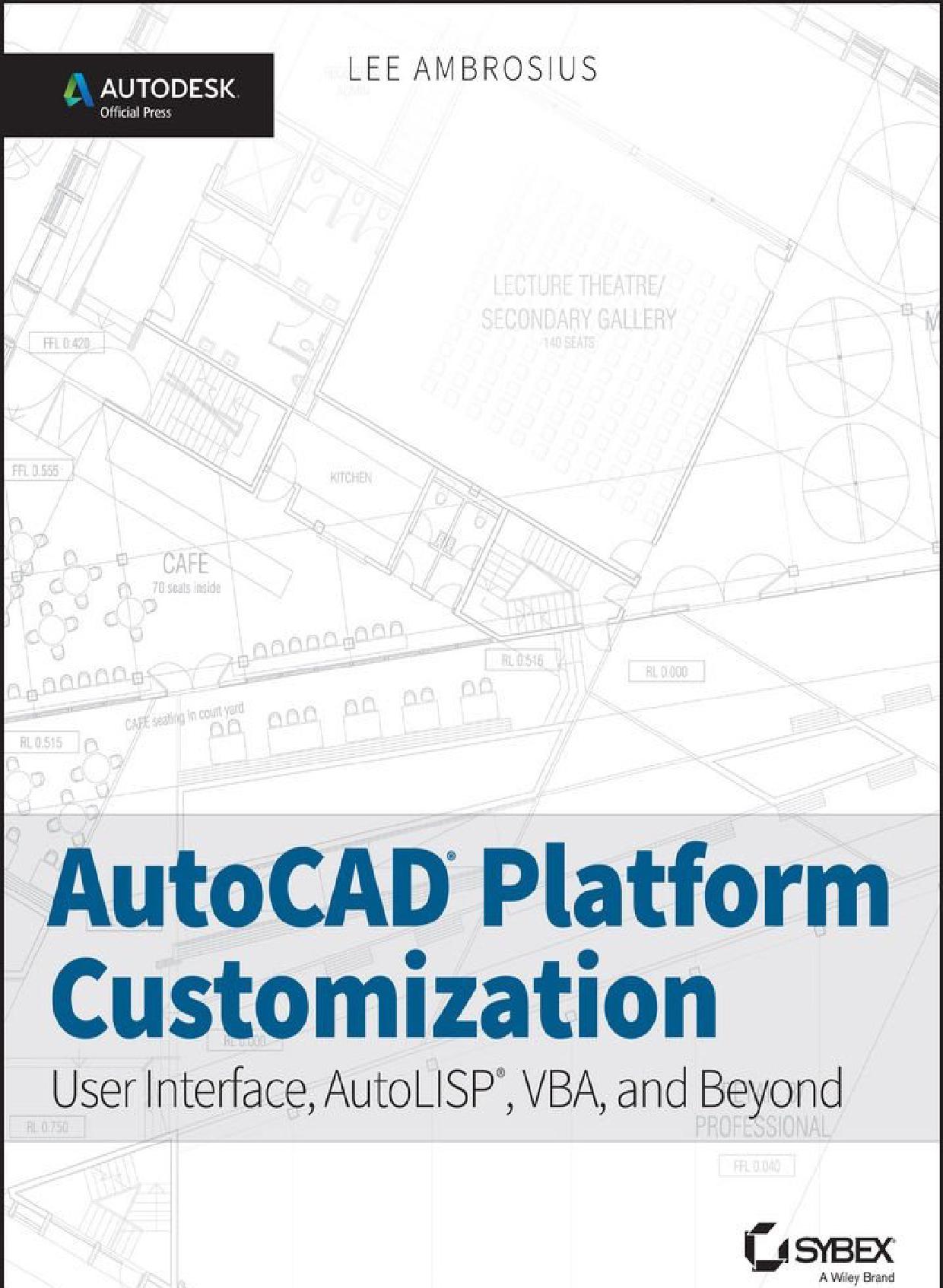 Welcome to AutoCAD Platform Customization: User Interface, AutoLISP, VBA, and Beyond. Have you ever thought about customizing AutoCAD only to think it is not for you because you’re not a programmer?

I have to give a very special thanks to all the great folks at Sybex, especially Willem Knibbe, for working on and helping to get this project off the ground after a few years of talking about it. The next two people I would like to thank are Mary Ellen Schutz and Dassi Zeidel, the development and production editors on this book; you two made sure I stayed on track and delivered a high-quality book. I also want to thank Liz Welch (copyeditor), Candace Cunningham (proofreader), and Ted Laux (indexer) for the work you all did on this book.

Thanks to all the folks at Autodesk, who put in the long hours and are dedicated to the work they do on the Autodesk® AutoCAD® product. I cannot forget some of the most important individuals on this book, my technical editors: Rebecca Afshar, Craig Black, and Richard Lawrence. Rebecca Afshar performed the technical edit for Part I, “AutoCAD Platform Customization: User Interface and Beyond.” Rebecca has spent many years as both an instructor and user of AutoCAD; all of this experience helped to make this book even better.

Craig Black performed the technical edit for Part II, “AutoCAD Platform Customization: AutoLISP. ” I have known Craig for nearly 20 years and first met him while attending an AutoLISP® session at the local Autodesk Training Center, where he was an instructor. Craig is a excellent AutoLISP programmer and was a great asset as a technical editor on this book. It is always a pleasure to collaborate with Craig and this book was no different.

Last but not least, Richard Lawrence performed the technical edit for Part III, “AutoCAD Platform Customization: VBA.” Richard is a great friend who I met many years ago at Autodesk University. He is a passionate and driven user of AutoCAD and is always looking to improve the way he uses AutoCAD. Being a technical editor is never the easiest job, but it is one of the most important and I appreciate what you all did to make this book better.

Lee Ambrosius first started working with AutoCAD R12 for DOS in 1994. As a drafter, he quickly discovered that every project included lots of repetition. Lee, not being one to just settle for “this is just the way things are,” set out on a path that would redefine his career. This new path would lead him into the wondrous world of customization and programming which you might catch him referring to as “the rabbit hole.”

In 1996, Lee began learning the core concepts of customizing the AutoCAD user interface and AutoLISP. The introduction of VBA in AutoCAD R14 would once again redefine how Lee approached programming solutions for AutoCAD. VBA made it much easier to communicate with external databases and other applications that supported VBA. It transformed the way information could be moved between project management and manufacturing systems.

Not being content with VBA, in 1999 Lee attended his first Autodesk University and began to learn ObjectARX®. Autodesk University had a lasting impression on him. In 2001, he started helping as a lab assistant. He began presenting on customizing and programming AutoCAD at the event in 2004. Along the way he learned how to use the AutoCAD Managed.NET API.

In 2005, Lee decided cubicle life was no longer for him, so he ventured off into the CAD industry as an independent consultant and programmer with his own company, HyperPics, LLC. After he spent a couple of years as a consultant, Autodesk invited him to work on the AutoCAD team; he has been on the AutoCAD team since 2007. For most of his career at Autodesk, Lee has worked primarily on the customization and end-user documentation. Recently, he has been working on the AutoLISP, VBA, ObjectARX,.NET, and JavaScript programming documentation.

Welcome to AutoCAD Platform Customization: User Interface, AutoLISP, VBA, and Beyond. Have you ever thought about customizing AutoCAD only to think it is not for you because you’re not a programmer? If so, you are not alone, as there are many people that connect customization with programming. However, customization is not the same as programming, but programming can be considered a form of customization.

While using one of the supported programming languages can be useful in implementing custom workflows and new commands, there are many simpler ways to increase your drafting efficiency in a shorter period of time. AutoCAD supports a wide range of customization features that you can learn and begin to leverage in minutes, which can led to improved CAD standards and a decrease in the amount of time it takes to complete a task.

I, like many others, even yourself most likely, have customized AutoCAD without even realizing it. Have you ever created a new layer, text style, or block? Chances are pretty great that you have created one or more of those items before. You might have even stored those items in a drawing template (DWT) file so they would be available each time a new drawing was created. While you might not have thought about these as forms of customization, they are indeed a few of the basic drawing customization features that can be used to enhance the out-of-box AutoCAD experience.

Drawing customization affects the appearance of and settings in a drawing file or drawing template (DWT) file, and should form the cornerstone of your company’s CAD standards. Often when people think of customization though, they commonly think of application customization, which contains the support files that AutoCAD uses as well as the tools in the application’s user interface. Application customization is not dependent on which drawing is currently open, but which user profile or workspace might be current.

Author Autocad studentPosted on June 3, 2021June 3, 2021 138 0
Acknowledgments Every year that I get to work on another version of AutoCAD® Civil 3D® Essentials is a blessing, and this year is the...
Read More

Author Autocad studentPosted on June 7, 2021June 7, 2021 110 0
Welcome to AutoCAD Platform Customization: VBA! Have you ever thought to yourself, why doesn’t the Autodesk® AutoCAD® program include every feature I need?
Read More