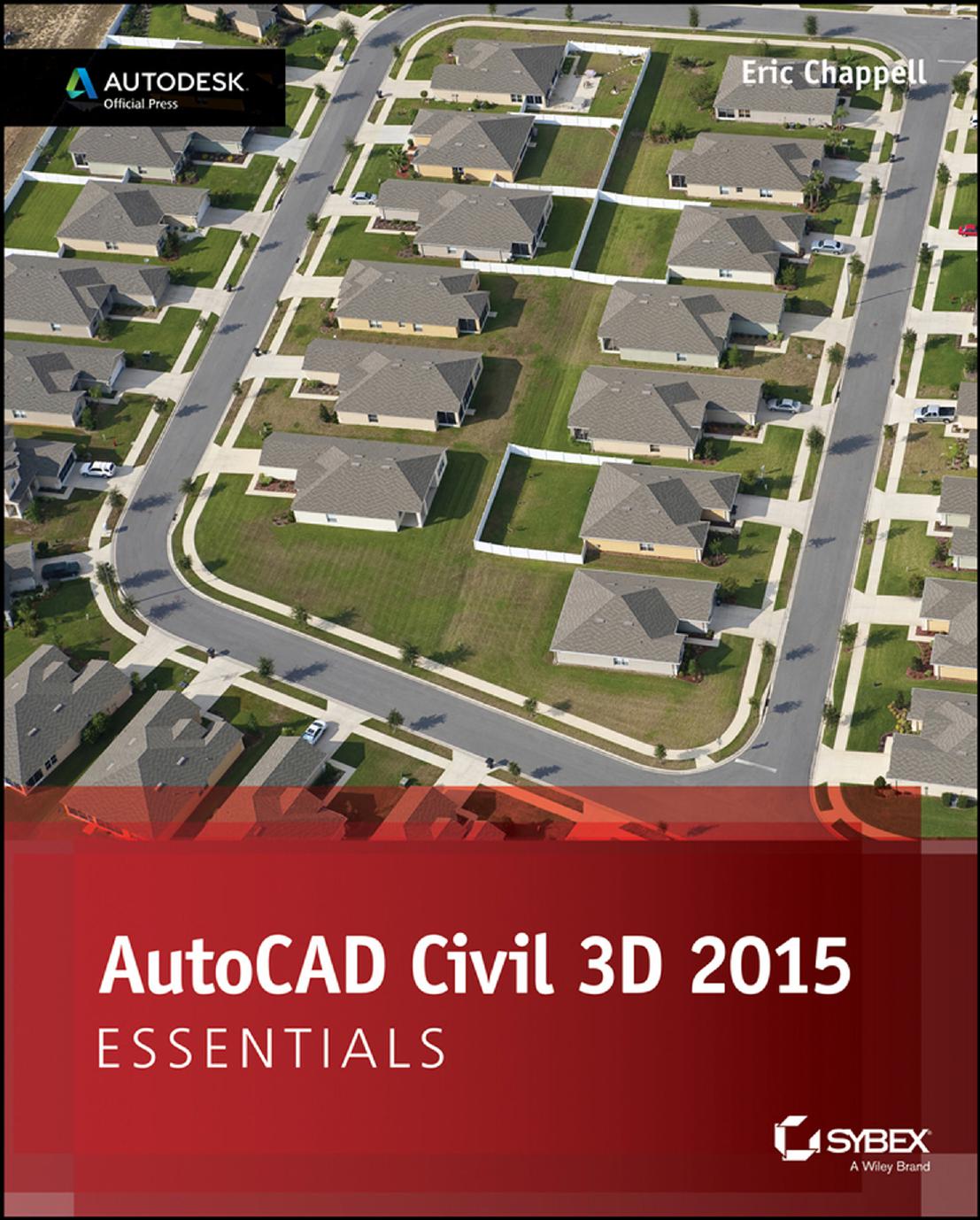 Every year that I get to work on another version of AutoCAD® Civil 3D® Essentials is a blessing, and this year is the fourth! I am very encouraged by the emails I get from readers throughout the year, asking questions and offering suggestions, and I especially like those that compliment the book. Of course, I’m just a small part of the book’s success, and it would be a terrible disservice not to mention Wiley/Sybex for giving me this opportunity yet again, and its great people for helping make the book a success. To Willem Knibbe, thanks once again for making the book happen. To Pete Gaughan, kudos for taking the reins and being a great coordinator, sounding board, and go-to person. To Kim Wimpsett, thanks for putting up with me and making the book better than I could have ever made it myself. To Joshua Modglin, thanks again for giving me the peace of mind of knowing you had my back on the
technical aspects.

And to my family, for putting up with a fourth year of Dad working late nights and being distracted and sometimes stressed, and for all the other not-so-fun aspects of having an author in the family: thank you. I especially would like to thank my wife Dixie for putting up with my schedule and being a “single parent” when things got really busy for me.

Eric Chappell has been working, teaching, writing, and consulting in the world of civil engineering software for more than 20 years, and he is a recognized expert in the world of Autodesk® AutoCAD Civil 3D® software. Eric joined the Autodesk family in September 2013 as a Premium Services Specialist. In the 12 years prior to that, he wrote training materials and performed training for end users, trainers, and Autodesk employees around the globe. For several years, he has worked with Autodesk in authoring and developing two Autodesk certification exams.

He also served as design systems manager for Timmons Group, a civil engineering and surveying firm based in Richmond, Virginia, where he managed software, standards, and training for more than 200 users. Eric is also a highly rated instructor at Autodesk University, where he has taught for the past 10 years.

Prior to writing and consulting, Eric spent nearly 10 years in the civil engineering and surveying fields while working for the H.F. Lenz Company in Johnstown,Pennsylvania. During his time at H.F. Lenz, he gained considerable practical experience as a survey crewman, designer, engineer, and CAD supervisor. Eric also holds a BS degree in Civil Engineering Technology from the University of Pittsburgh at Johnstown and is certified in Pennsylvania as an EIT.

Eric is originally from southwestern Pennsylvania, but he has lived in the Richmond, Virginia, area for the past 13 years with his wife and four children. He enjoys being outdoors and spending time with his family. He can sometimes be seen playing drums for the band Sons of Zebedee, which plays at a variety of events in the Central Virginia area.

If you would like to contact the author regarding comments or suggestions, please email CivilEssentials@gmail.com. You’re also welcome to visit Eric’s blog at http://ericchappell.blogspot.com.

When the first version of this book was born just over three years ago, my hope was for it to be one book in a long and successful series that would educate, inspire, and even excite many people about using the Autodesk® AutoCAD® Civil 3D® software. In order to do this, I decided that each book in the series had to meet the following criteria:

Since the first version of the book wasreleased, I have received tons of great feedback about how well this book functions in many learning environments. I have also used the book myself to teach classes in a corporate environment, and I am very pleased with how it performs. I am confident that the goals I listed have been met, and for that reason I have held to the same writing style, format, and delivery that proved to be so successful in the previous versions.

As you work your way through the book as a teacher, a student, or an end user, you’ll find that the first two chapters, although very important, are more general and introductory. After that, you’re going to take a journey through the completion of a residential land development projectstart to finish. In fact, the example

project is based on a residential development that was built about 10 years ago, not far from my home. The topics are presented as though you have never touched a CAD program before; and wherever possible, there are sidebars and other forms of augmentation that relate what you’re doing to the real world.

You’ll also find that as I wrote this book, I tried to sympathize with future readers by thinking back to my college days when I was learning about surveying and civil engineering for the first time. There were many times when I felt frustrated and lost because I was learning new and foreign concepts and did not see how they related to the real world. I can remember being out in the field during my surveying classlooking through the survey instrument, writing down measurements, and having no idea why. That wasn’t

an enjoyable feeling and isn’t one I want you to experience as you learn the new and foreign concepts in this book. Eventually I learned all about surveying, and now I have an in-depth understanding of how those measurements relate to designing and building roads, buildings, and other thingsbut it took many years. It’s my sincerest hope that this book gives you a head start on some of those types of concepts while at the same time relating them to Civil 3D in ways that hit home for you.

What’s New in This Book?

Changes have been made to AutoCAD Civil 3D 2015 Essentials so that it’s even better than last year’s version. Following are the details.

The structure of the book has been modified so there is greater distinction between the informational portions of the book and hands-on exercises. Exercises are numbered and shown in the table of contents. Each exercise stands on its own and doesn’t require the completion of a previous exercise (except in rare cases and where noted). Also, there is a Complete version of the exercise file(s) in each applicable case so you or your students can compare your results to what is expected.

If you’re familiar with previous versions of this book, you’ll notice a slight difference in the structure of the exercise steps. The information portions have been separated from the actual instructions describing the picks and clicks that you should be performing in the software. This makes it clearer which parts you should do versus those you should know. The result is a more direct, efficient, hands-onexperience when completing the exercises.

Contents at a Glance

Author Autocad studentPosted on June 7, 2021June 7, 2021 110 0
Welcome to AutoCAD Platform Customization: VBA! Have you ever thought to yourself, why doesn’t the Autodesk® AutoCAD® program include every feature I need?
Read More

Author Autocad studentPosted on June 3, 2021June 3, 2021 134 0
Welcome to AutoCAD Platform Customization: User Interface, AutoLISP, VBA, and Beyond. Have you ever thought about customizing AutoCAD only to think it is not...
Read More